Sometimes it good to NOT listen to oneself.
I told myself that I would not buy/look at any newly made teacups.
Then I went to Homegoods with one of my sisters-by-choice
and there it was ....
This beautiful black and white toile/transferware trio.
I couldn't resist. 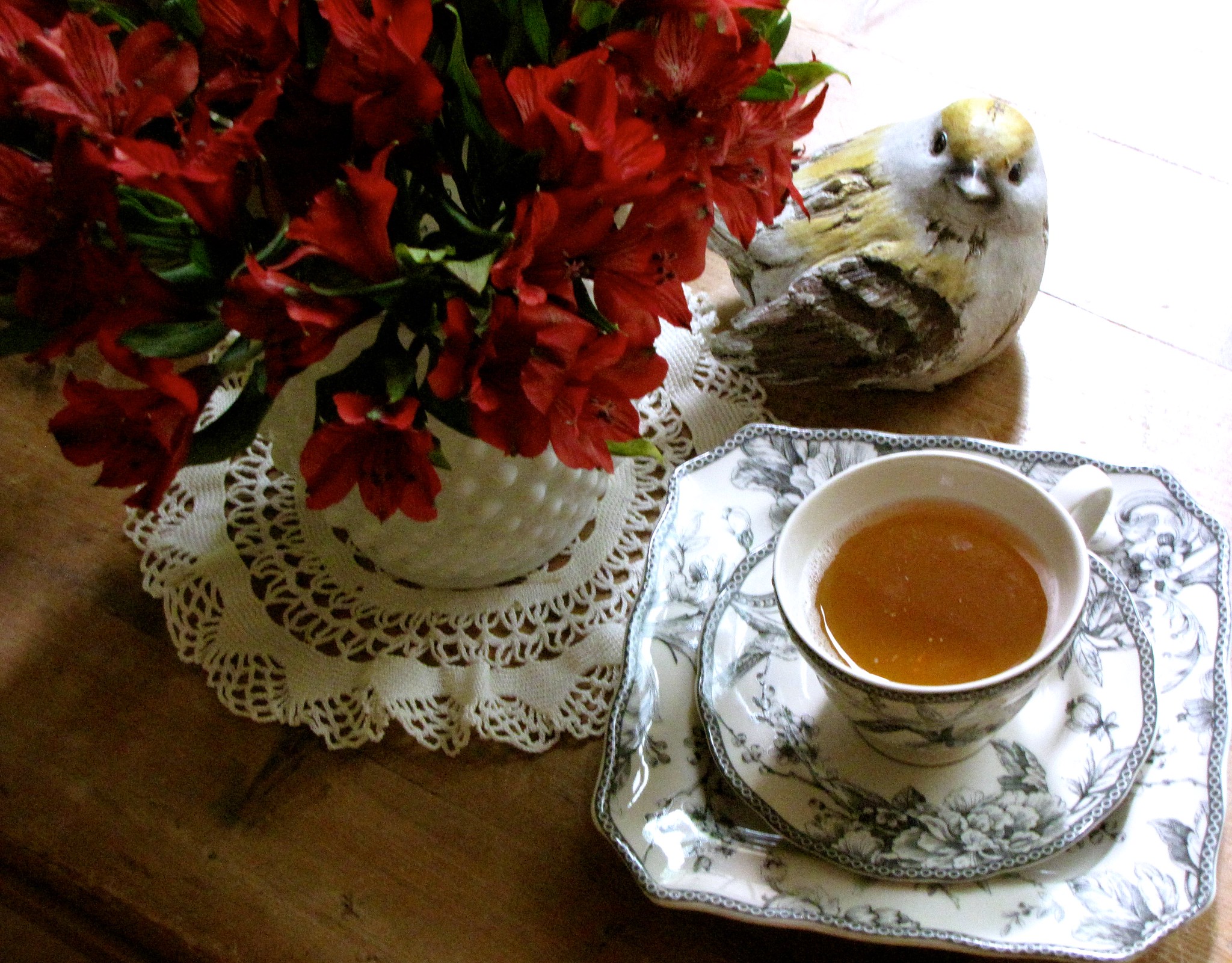 Square Plate and Cup and Saucer with floral design and birds! 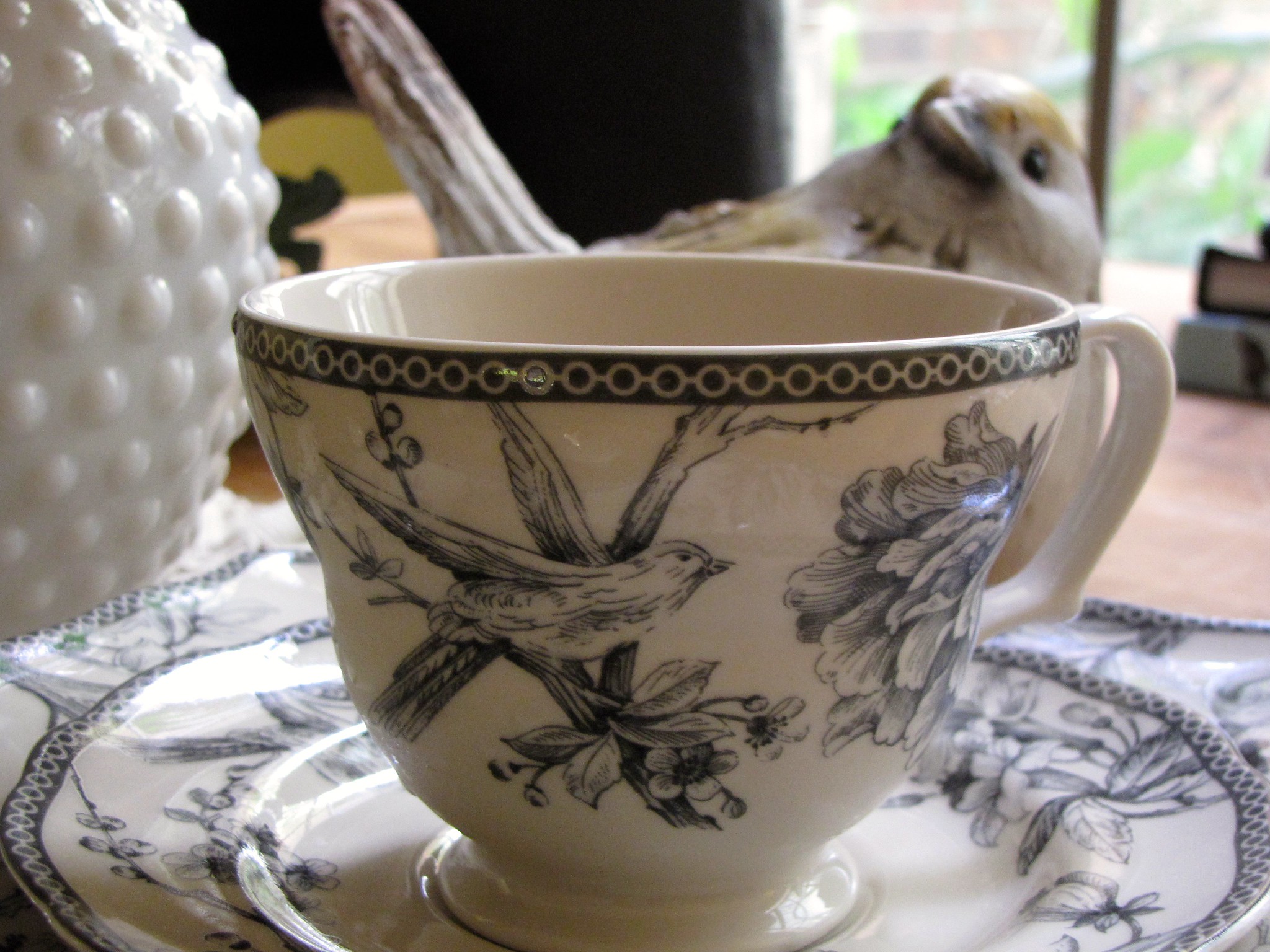 It is called Adelaide Grey by 222FIFTH.
Tea tastes wonderful in this cup and I had a nice salad on the plate.
Perfect.

In addition, I had a couple of wonderful mail calls.
Bigelow had a give-a-way on Face Book.
They gave away tins filled with Constant Comment to celebrate
their 70th anniversary.
I have fond memories of drinking Constant Comment.
My mother and I would visit with a good friend and her daughter at least
once a week and drink Constant Comment -- and read tea leaves!
They also included a sample of Green Tea with Pomegranate
(delicious).

The other mail call was from Angela at Tea With Friends.
She gave-a-way a fun teapot tea strainer and a tote bag.
A girl can never have enough tote bags.
She finds the most wonderful tea things. 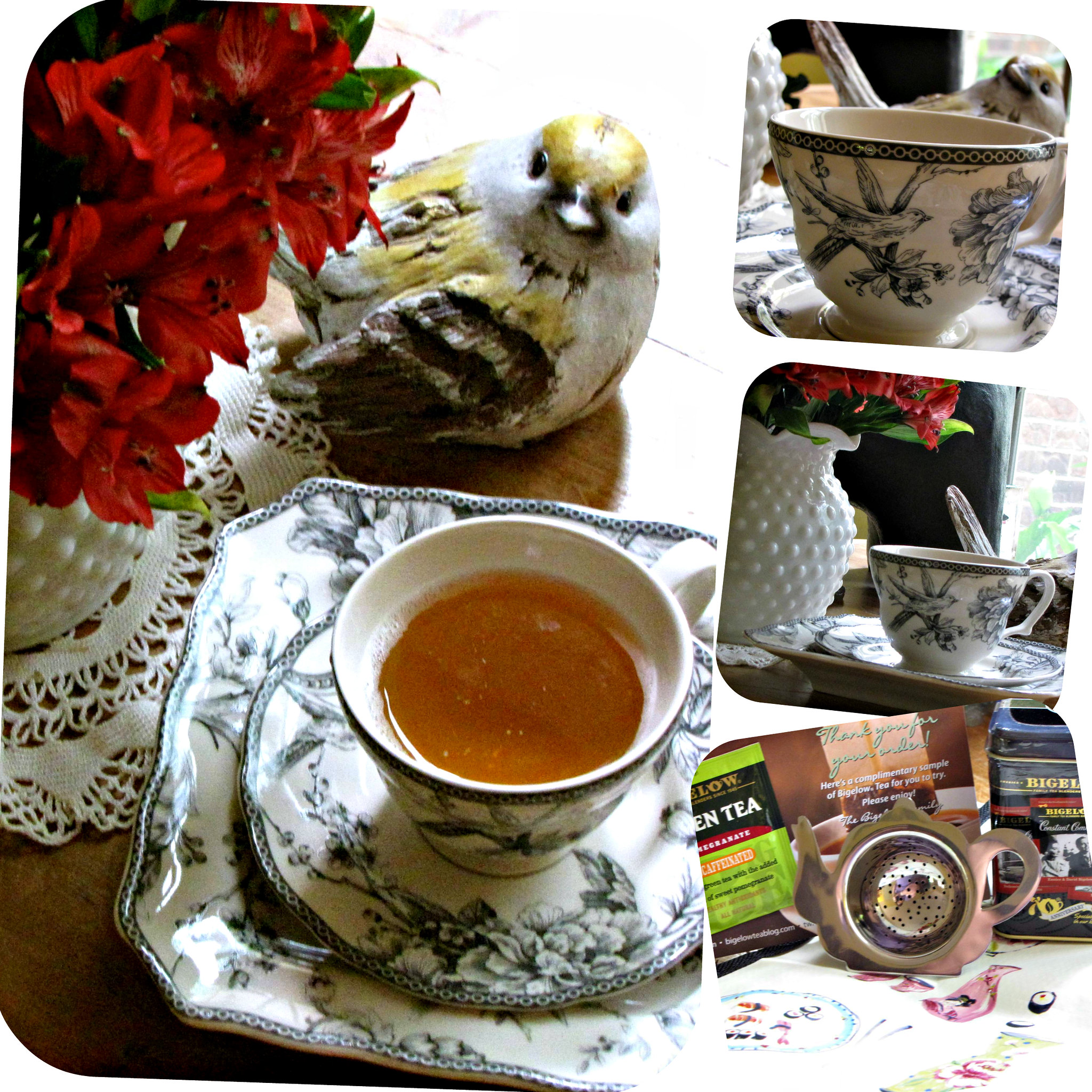 I've had a tea-riffic time!


“I take a few quick sips. "This is really good." And I mean it. I have never tasted tea like this. It is smooth, pungent, and instantly addicting.

"This is from Grand Auntie," my mother explains. "She told me 'If I buy the cheap tea, then I am saying that my whole life has not been worth something better.' A few years ago she bought it for herself. One hundred dollars a pound."

"You're kidding." I take another sip. It tastes even better.”
― Amy Tan, The Kitchen God's Wife


Wishing YOU well and much joy.

Thank you to the hosts of:
Mosaic Monday

I've been home nursing my bad back
and trying not to sit for any length of time ...
that means no blog posts.

So, I decided it was time to do a This and That post
adding a little bit every few days. 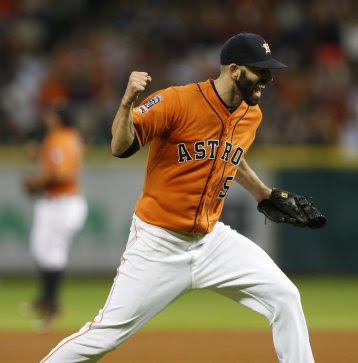 I think I've watched the Mike Friers No-No game three times.
Friday night when it happened,
early Saturday morning rerun
and the Saturday afternoon rerun.
Mike came from the Brewers to the Astros in a trade.
This was his first complete game and
the first No Hitter in Minute Maid Park.
Exciting each time I watched.

I participated in the Index Card A Day challenge again this summer.
However, I didn't do 61 cards this year.
I simply ran out of steam and the back didn't help.

I thought I'd share a few of my favorites starting with cats. 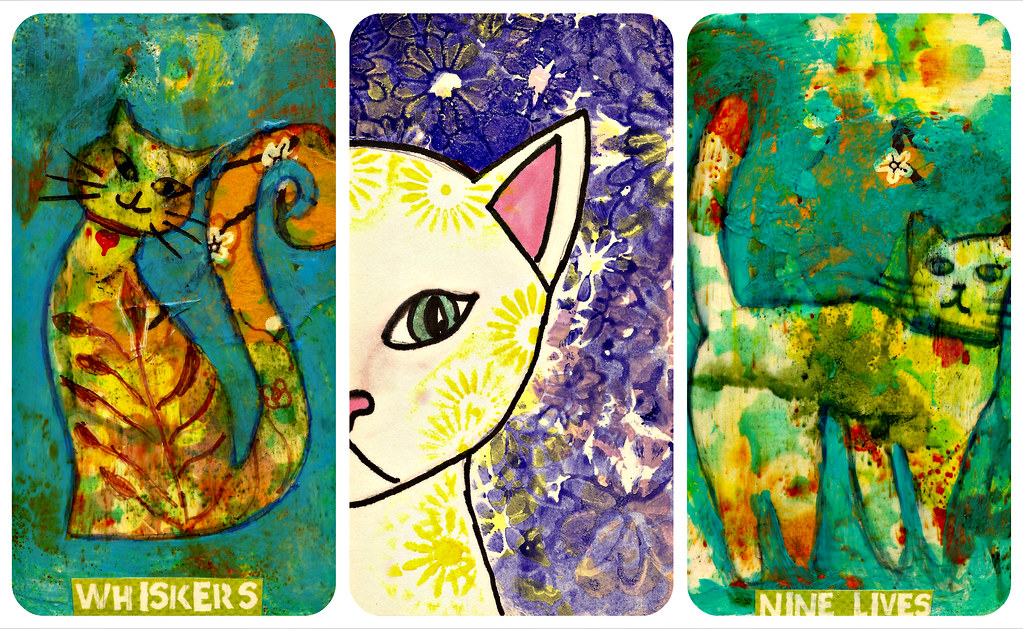 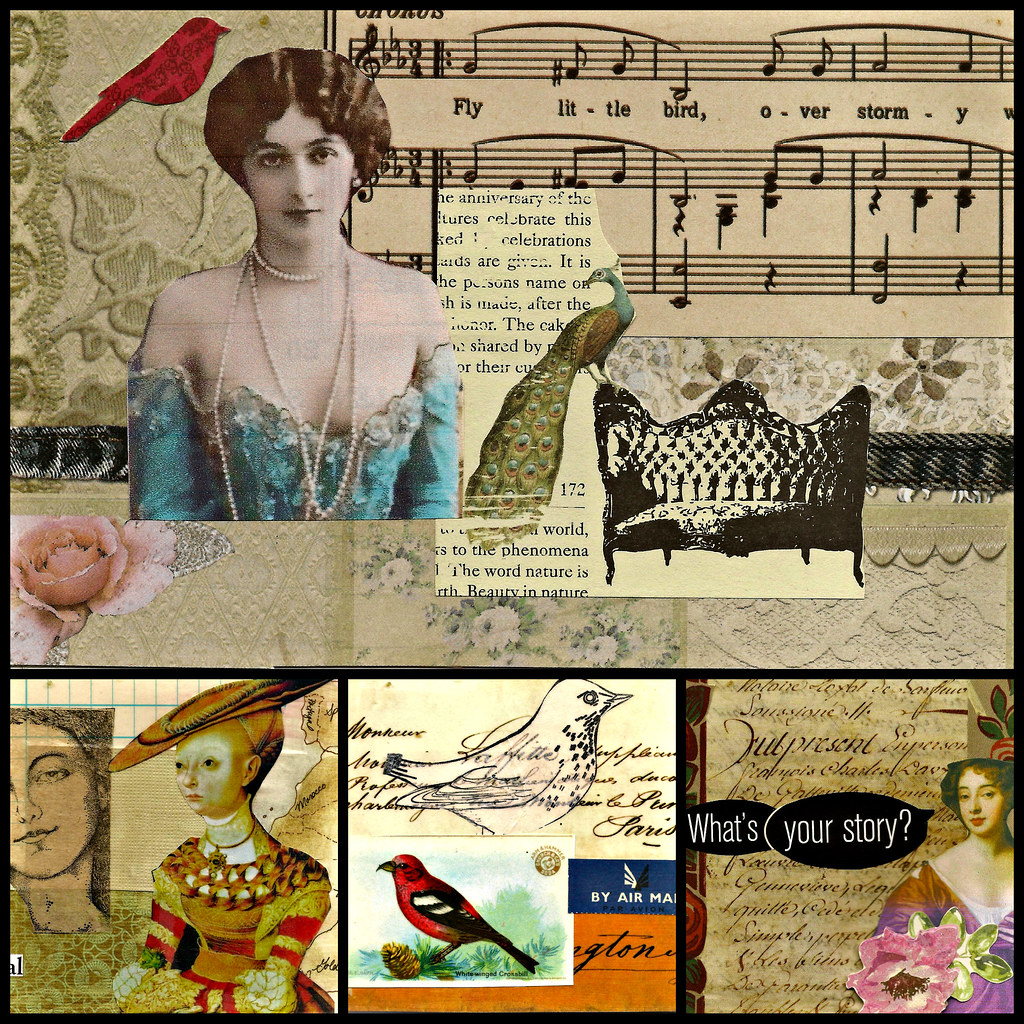 I took my time.
Didn't rush and completed 34 cards.

So, if I wasn't being arty, and I wasn't reading..
what have I been doing???
Crocheting!
On these hot, miserable days I didn't want to go out.
So I decided if I was going make things for the holidays,
now was a good time to get busy! 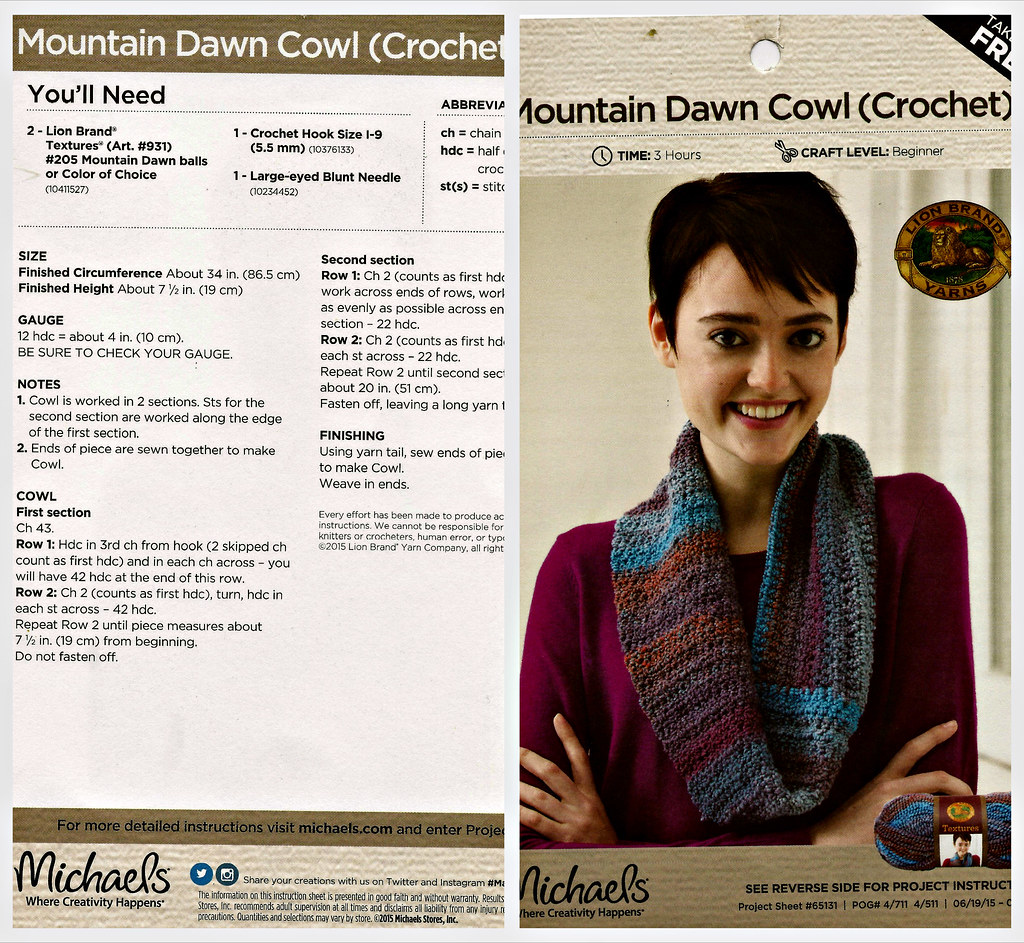 I liked the pattern and the cowl looked quick and easy (it is).
I picked two color ways -- Ocean Waves and Desert Sands --
and will have enough yarn to make several cowls.
I always keep the first one for myself.
It has all the mistakes I make while I'm figuring out the pattern!
I really didn't like this yarn (Lion Brand Textures) when I started.
It was difficult to see the loops and where to put the next stitch.
But, by the time I was finished with the first one, I was moving right along
and liking the result. 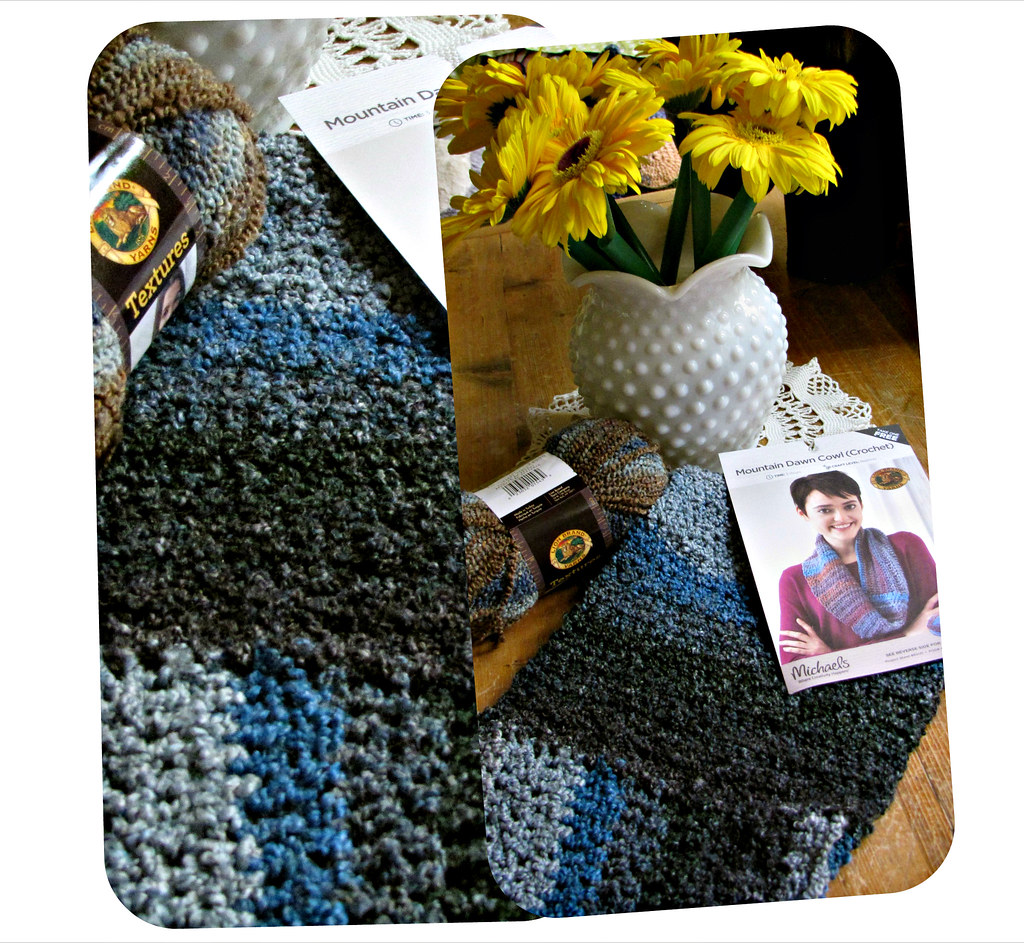 This is the Ocean Waves color way and the first one I made (mine!). 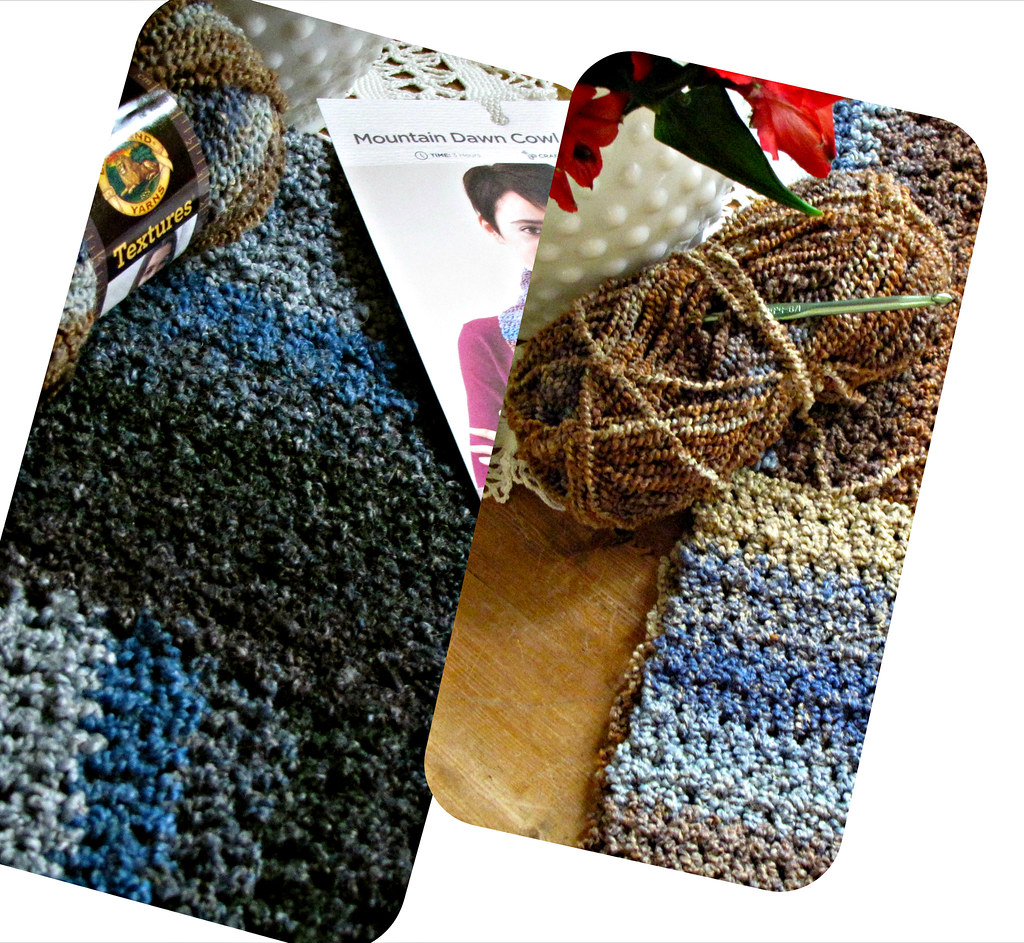 And this is the Desert Sands on the right.
It has a Southwest feel.
I have a new cowl and one made for a gift.
Moving right along!

Wishing YOU well and much joy.

Email ThisBlogThis!Share to TwitterShare to FacebookShare to Pinterest
Labels: Astros Baseball, Cowl, Crochet, ICAD, Mosaic Monday, Potpourri, This and That


To celebrate International Cat Day, here are my three fur-babes. 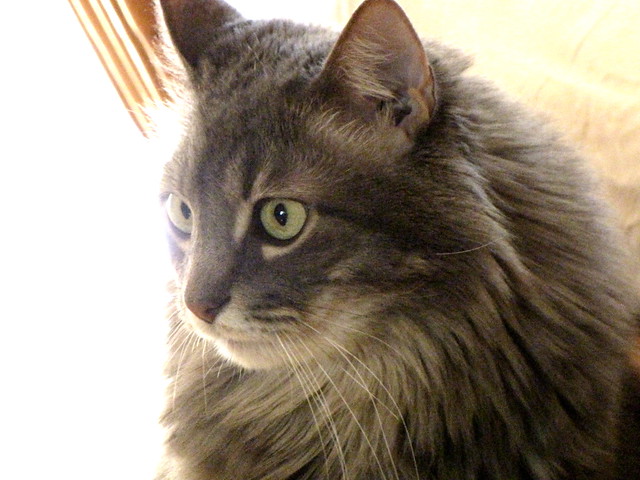 Teddy (AKA Theodorable, The Tedster) is  Chief Executive Officer.
He is eleven years old and has a heart condition.
He takes medicine daily and is, thankfully, doing great.
He is wise beyond his years and is steadfast in his belief that he
must take care of Mum now.
After all, he is the man of the house. 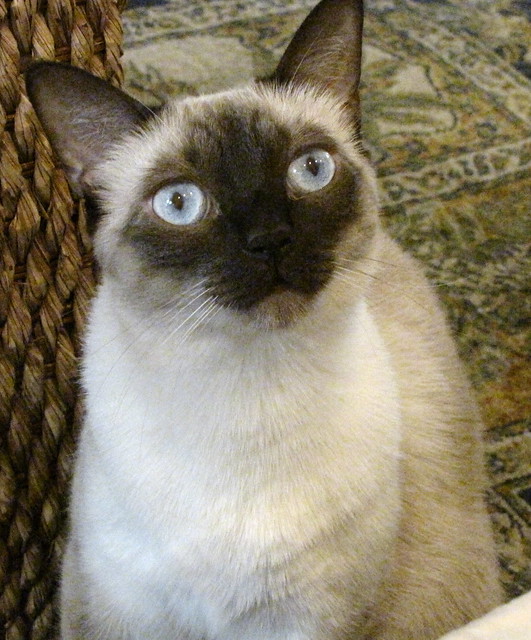 This is Cassie (Cassiopeia) the little star.
She is 5 years old.
She is Mummy's girl and is a Princess.
Scared of her own shadow, she doesn't like visitors.
She curls up next to Mum, sleeps with Mum,
keeps me safe and feeling loved.
She loves to supervise especially when yarn is involved. 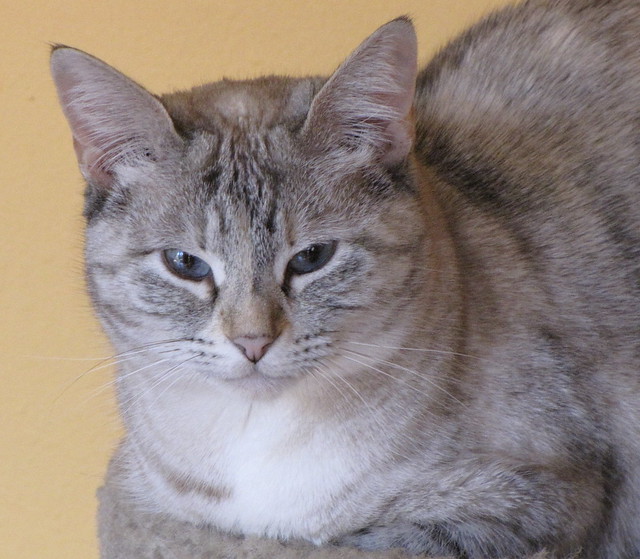 Not to be left out is Mina.
What a hoot she is!
Adopted from a local no kill shelter,
she really is the boss (don't tell Teddy).
She's always into something.
Never met a stranger (wish she was more like Cassie).
Hungry all the time (probably from her early days on the street).
She has hip dysplasia, but it doesn't stop her.

So, I'm a cat lover and according to this article that I found on
Face Book, there are benefits to being a cat owner.
If you are wondering about being owned by a cat (!!!),
here's what a cat can do for you!


The Benefits of Being A Cat Owner from Mental Floss

A study of British pet owners found that people who owned cats  tended to be smarter than their dog loving counterparts. Both in terms of IQ score and overall level of education, people who own cats come out on top in the brains department. It’s probably not the cat itself making you smarter, though; the researchers conducting the study said that smarter people tend to work longer hours, and since cats require less attention than dogs they are a better choice for the busy intellectual.

2. IT'S BETTER FOR THE ENVIRONMENT!

If you're worried about your  carbon footprint, it’s better to own a cat. A 2009 study found that over its lifetime, the resources needed to feed a dog make the same eco-footprint as that of a Hummer. Meanwhile, cats—which eat less in general and are more likely to eat fish than corn or beef flavored products—only have the approximate carbon footprint of a Volkswagen Golf.

Losing a loved one is incredibly painful, but one of the best ways of coping is to own a pet. Cats have been shown to help people get over their loss more quickly, and show less physical symptoms of pain, like crying. Despite the fact that they are only animals, cats serve as a social support during difficult times. People in mourning report talking to their pet to work out their feelings, since it is often easier to talk to something that won’t respond and can’t judge than to another human being.

If you’re a single guy and you can’t seem to get a date, get a cat! A British poll found that 82 percent of women agreed they are more attracted to men who like animals. And while having a dog will do wonders for your dating life, a whopping 90 percent of single women said that men who own a cat are “ nicer” than other guys. It seems women buy into the stereotype that cat owners are more sensitive and thoughtful, so listing that you own a cat on your dating profile could do wonders for the number of responses you get. But remember, a cat is for life, not just until you find a partner.

Owning any pet is good for your heart. Cats in particular lower your stress level—possibly since they don’t require as much effort as dogs—and lower the amount of anxiety in your life. Petting a cat has a positive calming effect. One study found that over a ten year period cat owners were  30 percent less likely to die of a heart attack or stroke than non-cat owners.

The stereotype that dogs are more affectionate than cats is just that: a stereotype. In fact, it turns out that cats can be just as good companions as dogs,  especially for women. A 2003 Swiss study found that having a cat in the house is the emotional equivalent of having a romantic partner. As well as initiating contact much of the time, studies have shown cats will remember kindness shown to them and return the favor later.
But cats really do have the upper hand in these relationships. After thousands of years of domestication, cats have learned how to make a half purr/half howl noise that sounds remarkably  like a human baby’s cry. And since our brains are programmed to respond to our children’s distress, it is almost impossible to ignore what a cat wants when it demands it like that.

7. A REFLECTION OF YOUR PERSONALITY!

Owning a cat tells people a lot about your personality. While dog lovers tend to be the life of the party, cat owners are  quieter and more introverted. However, they score very highly when it comes to how trustworthy they are and how much they trust other people. Cat owners are also less manipulative and more modest. 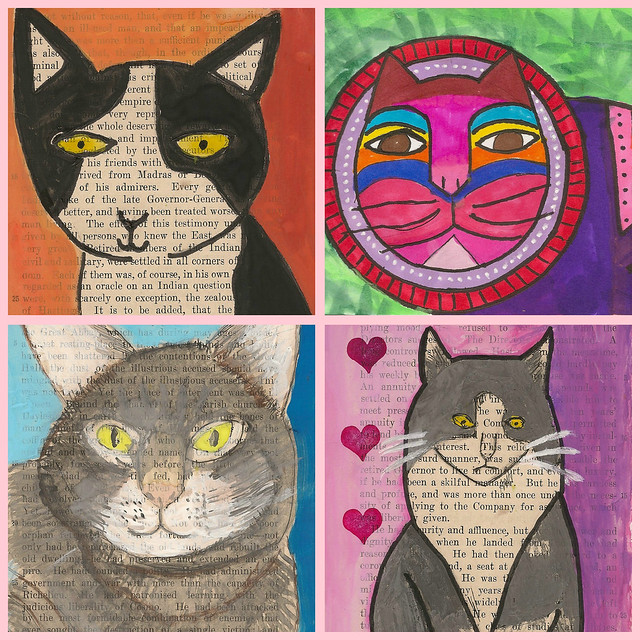 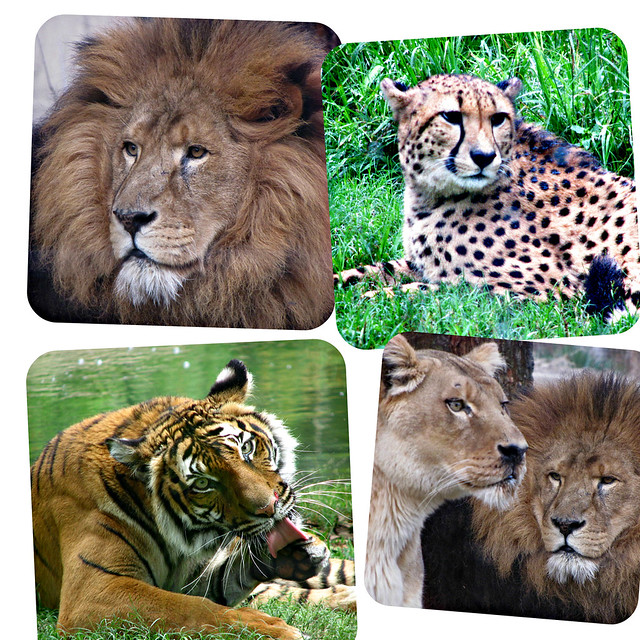 Thank you to the hosts of: 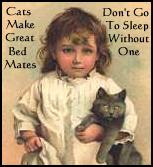 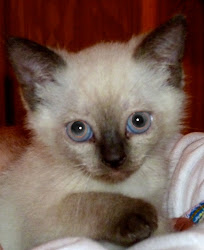 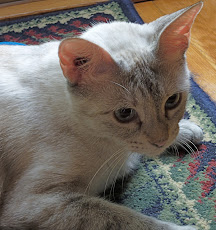